A report issued earlier this summer pointed to a dramatic rise in digital video piracy and the negative ramifications it has on the media and entertainment space, the U.S. economy, and ultimately on consumers. According to “Impacts of Digital Video Piracy on the U.S. Economy,” released by the U.S. Chamber of Commerce and NERA Economic Consulting, “Digital video piracy results in significant losses to the U.S. economy, harming businesses ranging from content production firms to the innovative technology companies that are driving the digital distribution revolution.”

Unfortunately, while TV consumer choice is stronger than ever, illegal entities have taken advantage of the explosion in technology and evolving consumer behaviors by enabling illegal streaming through piracy devices and apps. In fact, 80% of piracy is now attributable to streaming, according to the report, a big change from when download-based technologies such as BitTorrent were responsible for 40% of the unlicensed content delivered online.

The U.S. movie and television industry contributed approximately $229 billion to the U.S. economy in 2017, and 2.6 million jobs. But the study found that digital video piracy is resulting in lost revenues of at least $29.2 billion, conservatively, and up to $71 billion annually. On top of that, the economy loses between 230,000 and 560,000 jobs per year. This is a significant loss given the important role that the industry plays for the American economy.

Jonathan Weinberger, Senior Vice President of the U.S. Chamber of Commerce Global Innovation Policy Center, said in a statement that digital piracy has emerged as a “serious problem” that continues to undermine and threaten the growth that video streaming and innovative technologies have brought to the movie and TV space: “The findings from this study highlight the urgent need to coordinate enforcement efforts against illegal streaming and strengthen IP protections both in the U.S. and abroad.”

Below are a few of the stats uncovered by the report that demonstrate how digital piracy is affecting economic growth and industry progress: 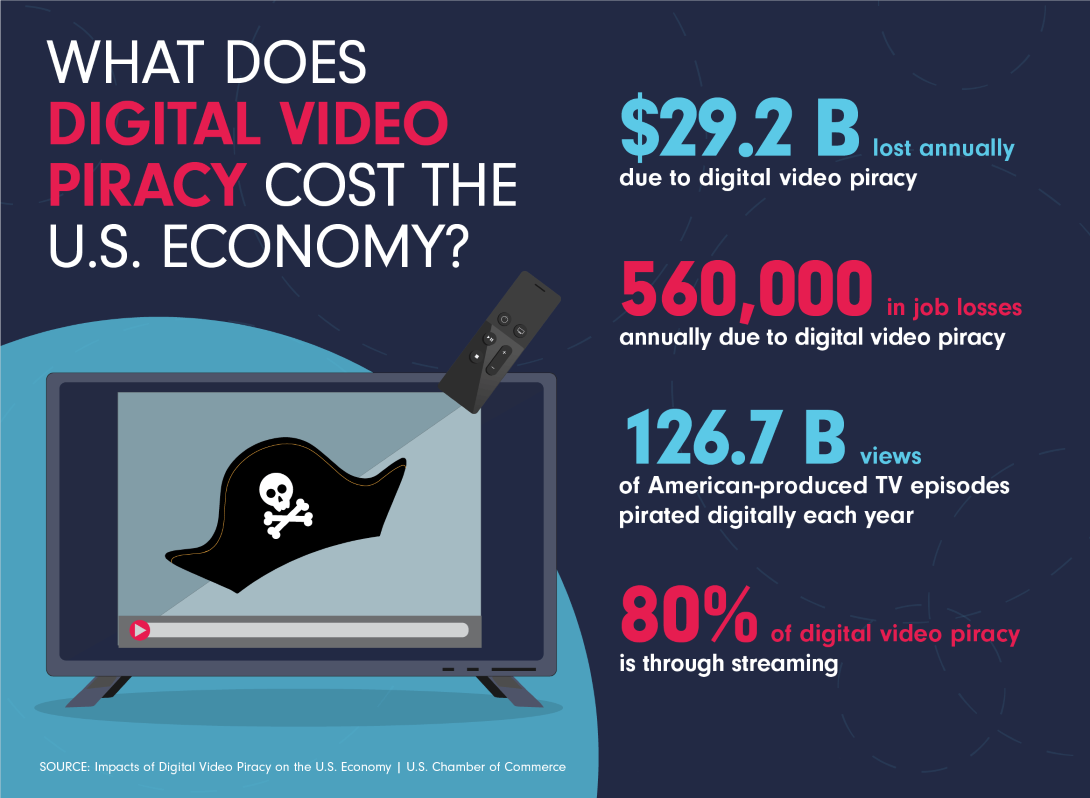