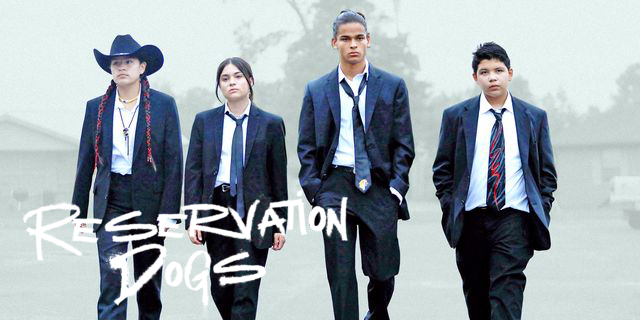 On October 11, communities across the United States will observe Indigenous People’s Day: a time to celebrate and learn about the diversity of indigenous nations who settled these lands long before the arrival of Europeans and who, in the face of enormous obstacles, maintain their rich heritage to this day.

As states and municipalities reassess our collective past, replacing a day commemorating a controversial conqueror with a day honoring the original inhabitants of the land, a similar reappraisal is happening in the art and media world – particularly in television. Follow along to learn about efforts to improve representation of indigenous people onscreen, and some of the new groundbreaking shows that put Native American creators and actors front-and-center.

While statistics around representation of Native Americans on television have been historically sobering, big changes are afoot. According to a recent report, the percentage of Native American actors on television amounts to less than a quarter of their presence in the population. Native American women are particularly underrepresented, occupying barely 0.4% of screen time on streaming services. For this reason, a group of 28 writers from the Writers Guild of America West’s Native American & Indigenous Writers Committee signed an open letter in 2020 calling on the industry to commit to advancing greater representation, from actors and directors to screenwriters and showrunners.

Fortunately, a number of shows are stepping up in representing indigenous issues, as well as showcasing the talented pool of Native American actors. Here are a few of the most groundbreaking, not-to-miss shows:

Life on a reservation is tough – especially when your best friend has died. And for Elora Danan, Bear, Willie Jack, and Cheese, the wanderlust is acute. This FX comedy traces the adventures and misadventures of four indigenous teenagers willing to do whatever it takes – yes, whatever – to get to the Golden State of California. Filmed in Okmulgee, Oklahoma, home of the Muscogee Nation, the series is the first to feature all-indigenous writers and directors, along with nearly the entire cast and production crew. Produced by Sterlin Harjo and Taika Waititi, it has just been renewed for a second season.

As this Peacock series shows, sometimes history can also be approached with humor. When the mayor of sleepy Rutherford Falls attempts to move the statue of the town founder, she has no idea what kind of crisis she is unleashing between Nathan Rutherford (Ed Helms), a descendent, and Reagan Wells, played by Jane Schmieding in a rare leading role for a Native American woman. Hailed as a show that “is so incredibly sure of itself that it’s hard to not root for everyone involved,” Rutherford Falls reminds us of a very simple fact: behind our postcard-perfect small towns, there were Native American communities here first.

Back in 2005, Tracey Deer, a Quebec-based screenwriter and director from the Mohawk Nation, produced the documentary Mohawk Girls, which followed the lives of three teenage girls from her reservation. Five years later, she created a pilot for a fictional series, which premiered in 2014. Here, the “girls” – now twentysomethings instead of teens – have to deal with issues such as love, careers, politics, and interracial dating, all while navigating the social dynamics of the Kahnawake Mohawk Reservation. Fortunately, although Mohawk Girls wrapped in 2016, it has been picked up by Peacock for American viewers to enjoy.

Emmy winners Ava DuVernay and Bird Runningwater are teaming up to bring us the first Native American family drama on network television. Sovereign will explore the “lives, loves, and loyalties” of a sprawling Indigenous family attempting to ensure the future of their tribe in the face both of external forces and their inner dynamics. According to DuVernay, “Sovereign is built to give you epic tales of power, politics, perseverance and passion a la Dynasty, Dallas and Empire — but with an epic Native cast and creators…We all deserve to see ourselves on television. Period.” With pilot commitment from NBC, the series hopes to come to fruition very soon.

Ava DuVernay is right: we all deserve to see ourselves represented on television. Fortunately, television has responded in recent years by embracing diversity and providing a platform to historically marginalized communities. And without denying that there is more work to be done, this is something to be celebrated. To learn more about how television is working to promote diversity on children’s TV, read our related blog post, Diversity in Children’s TV: How Disney Is Leading the Way. And to find out how TV is telling more stories featuring people with disabilities, read our article, Disability and Television: Validating Identity and Experience.