Juneteenth 2022:
What to Watch to Celebrate and Commemorate

On Sunday, June 19, America will celebrate Juneteenth 2022. This will be only the second federal observance of a holiday that roots back to 1865. That year, two months after the surrender of Confederate forces at Appomattox—the event that brought the Civil War to a close—Union General Gordon Granger arrived in Galveston, Texas. This was no ordinary visit: Grainger read out General Order Number 3 to the enslaved African Americans gathered in the area, bringing the news to them that they were free. Thus, the holiday “Juneteenth” was born.

While not all of us can make the pilgrimage to Galveston for Juneteenth 2022, there is one simple thing we can do right at home: educate ourselves about the holiday by watching some powerful documentaries, movies, and live shows that both celebrate and commemorate Juneteenth. Here are our top recommendations of what’s not to be missed:

Juneteenth: A Global Celebration for Freedom 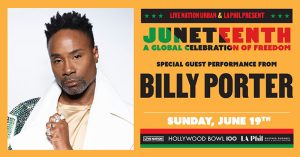 This year, CNN will be celebrating the holiday in a big way with Juneteenth: A Global Celebration for Freedom, a first-of-its-kind concert experience featuring an impressive array of artists, including Yolanda Adams, Anthony Hamilton, Billy Porter, Debbie Allen Dance, and many more. With the musical direction of Grammy-Award winner Adam Blackstone and Academy-Award winner Questlove, the event will also feature the Re-collective Orchestra, the first all-Black symphony ever to perform at the Hollywood Bowl. Tune in on Sunday, June 19th at 8:00 PM ET(?) to watch this special event.

Over on BET+, don’t miss Miss Juneteenth, the story of a former “Miss Juneteenth’s” attempt to prepare her reluctant daughter for the very same pageant in the hopes of winning her a full scholarship to a historically Black college—and in the process, helping her to avoid the mistakes she made along the way. The film stars the talented Nicole Beharie, whose performance won her the Best Actress Gotham Independent Film Award, together with Kendrick Sampson and Alexis Chikaeze in her film debut.

In its very first season, the comedy-drama Atlanta had a memorable episode based on Juneteenth, when Earn (Donald Glover) and Van (Zazie Beetz) are invited to the home of an interracial, upwardly mobile couple to celebrate the holiday. That being said, the exchanges that ensue are both awkward and enlightening. In addition to this episode, the whole series and its exploration of the Atlanta rap scene is absolutely worth seeing. Find it on the FX Network.

Every year, the Austin affiliate of PBS presents Juneteenth Jamboree, a long-running docuseries exploring history, culture, food, music, and the performing arts. Best of all, you can catch up on all  the back episodes online, dating back to 2008—so there’s no excuse not to watch! And this is just a part of the channel’s extensive catalog of shows and movies about the African American experience.

Thanks to the decades-long efforts of African American activists, Juneteenth was rescued from historical oblivion and restored to its rightful place as a national holiday. In 1980, it was declared a state holiday in Texas; from there, momentum slowly built to have it declared a holiday at the federal level, an effort led by the “grandmother of Juneteenth,” Opal Lee, who marched from Fort Worth, Texas to Washington, DC to bring attention to the cause. In 2021, her campaign was finally successful—and a new federal holiday was born.

Beyond is committed to expanding diversity and representation onscreen. To learn more about the African American actors, writers, and directors who are expanding diversity and representation on television, check out our Black History Month piece here. To learn about key LGBTQ milestones on television, read our article here. And to find out our recommendations for the best of Native American TV, click here.

3 Ways Cable Providers Are Connecting Everyone to the Internet
The Latest: Cable Broadband & Digital Equity
4 Wireless Trends from CES 2023