The Future of Movies: Cinema, Streaming, or Both?

After a year-and-a-half delay due to the COVID pandemic, No Time to Die, the much-anticipated 25th installment in the James Bond series, has finally been released. On its opening weekend in the United States, Daniel Craig’s final outing as 007 grossed $56 million at the box office – a respectable figure, but one that came in both below projections and behind the previous three Bond films on their opening weekends.

The less-than-overwhelming receipts for No Time to Die (some analysts were predicting intakes of $100 million or more) have reignited a debate that has consumed Hollywood in the age of on-demand and streaming: what is the best way for studios to release their movies? Let’s take a look at recent trends and discuss where some of the players currently stand in the debate.

The shrinking window between theatrical and home release

Traditionally, studios have carefully preserved a window of time between the theatrical and home releases of films, in order to boost theater ticket sales. Over time, however, and with the rise of paid streaming services and ongoing improvements in home-video technology, that window has shrunk from a 1980s average of six months to only 85 days by 2017. Now, as we navigate the new world order of theatrical windows, Universal Pictures has limited theatrical releases to only 17 days while Paramount Pictures and Warner Bros. have reduced their window to 45 days.

But despite numerous experiments with films by smaller studios, such as the 2006 release of Steven Soderbergh’s Bubble, the only simultaneous theatrical-and-digital release by a major studio, pre-pandemic, was Sony Pictures with The Interview. And this was not a planned decision, but rather a last-minute reaction to an international controversy that caused many cinemas to pull the feature. 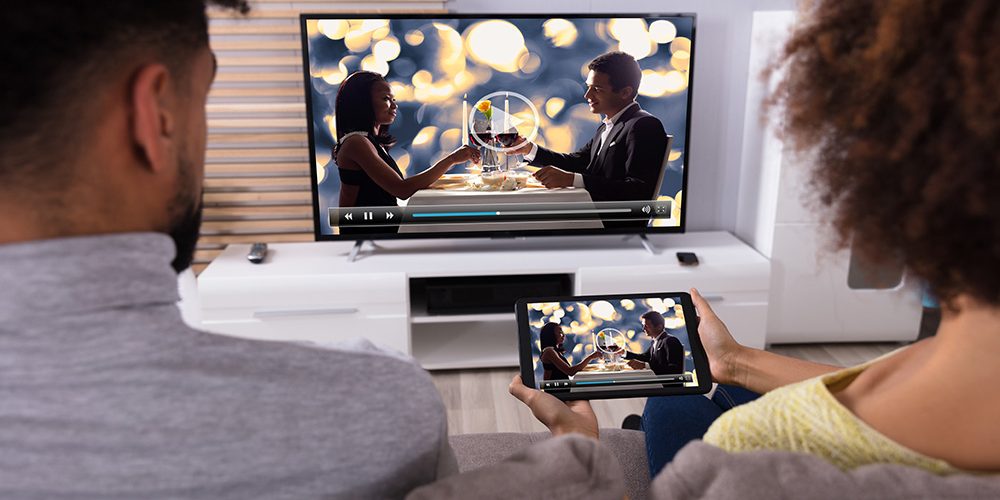 All of this changed with COVID. With theaters closing around the globe, stay-at-home measures enforced and, in many cases, theatrical releases already in the pipeline, studios were forced to be creative. Swinging quickly into action, DreamWorks Animation, owned by NBCUniversal, announced that its movie Trolls World Tour would be given a simultaneous digital release in April 2020. The same-day release was wildly successful, becoming the number one title across streaming platforms. NBCUniversal then decided to offer on-demand rental for other titles still in theaters, such as The Invisible Man, The Hunt, and Emma, garnering an additional $60 million in digital rental fees. The success of these initiatives led CEO Jeff Shell to declare that, as soon as theaters reopened, they would be releasing movies in both formats.

Later in the year, Warner Brothers announced that it would release its blockbuster Wonder Woman 1984 on Christmas Day—both in cinemas and on its HBO Max streaming service for a month at no additional charge. This “unprecedented” decision for a superhero movie was unusual, with theaters enjoying an exclusive window for the month following the simultaneous release, and with the movie then becoming available on prime-video-on-demand (PVOD). Shortly after this, Warner decided to extend the decision to all of its 2021 movies, including titles such as Tom & Jerry, Space Jam: A New Legacy, and Matrix 4. Faced with less-than-stellar numbers and pushback from theaters, Warner will discontinue the practice in 2022.

Then came the movies that skipped theaters altogether and went straight to streaming, such as An American Pickle on HBO Max, Mulan on Disney, and Boyfriends of Christmas Past on the Hallmark Channel. All told, some 499 movies premiered directly onto streaming-on-demand services in 2020.

The cinema is not dead

All of this being said, it is far too soon to count out the traditional cinema release. Yes, digital releases bring entertainment right into the comfort of people’s homes. Yes, simultaneous releases merge two marketing campaigns into one. Yes, consumers are far less willing than a generation ago to wait for months while cinemas enjoy exclusive runs.

But there still is nothing that compares to the old-fashioned experience of going to the movies – and the financial advantage, for those in the movie business, of having everyone pay a ticket instead of sharing a subscription or on-demand fee. Theater owners are already pushing back against the direct-to-digital model in all of its permutations, and even winning some victories. Disney, for one, has decided to return to exclusive theatrical releases for the rest of 2021. The president of Sony Pictures, Josh Greenstein, has also committed to distributing the studio’s production in cinemas first, stating unequivocally that “the theatrical movie experience will triumph.”

Although the pandemic continues to play a factor, we can venture a few guesses as to how trends will develop. First, expect the exclusivity window for theaters to shrink further, but not disappear. Second, expect the post-COVID movie experience to contain a much greater mix of cinema, simultaneous, and straight-to-streaming releases. And finally, expect this epic entertainment tug-of-war to continue unabated. Stay tuned.

To read more about recent trends in entertainment, read our companion article on whether weekly releases of TV shows are getting the upper hand over binge-watching here.